User identity in the IT systems of the Jagiellonian University

Identity of an IT systems user - a set of attributes in the identity management system that uniquely identifies the system user and describes his rights in IT systems.

Due to the fact that some of the systems used by users are located in the public cloud, their identity is also stored there.

In the case of identities using identifiers / e-mail addresses from the domains @ uj.edu.pl and @ doctoral.uj.edu.pl, the so-called federation between Active Directory of the Jagiellonian University and the Azure cloud service. This means that the verification of these users (and therefore passwords) takes place fully on the side of the University's on-premise systems, i.e. in the Active Directory of the Jagiellonian University.

The identity management system ensures that one person has one identity with which accounts on different systems can be associated.

In most cases, modification of identity data is performed in an automated manner as a result of data modification in source systems such as SAP and USOS. The identity management system is responsible for the automation of this process.

It is important that in strictly defined cases the network identifier - the main element of the identity used by the user - is changed.

This change occurs when a person's status changes. Such situations are for example:

The change of identifiers is carried out so that the user does not lose the possibility of receiving e-mail sent to previously used addresses in other address domains (this applies to students, PhD students and alumni).

In strictly defined situations, the person's identity is closed, i.e. access to certain IT services is no longer possible using an identifier related to the identity.

Examples of such situations are:

The general rule is that identity cannot be deleted, even if the person has ceased to have any relationship with the Jagiellonian University. This is due to the desire to ensure the security and accountability of the JU's IT systems.

In some cases it may happen that a second identity is incorrectly created for a person. Then one of them is deleted during the merge process. 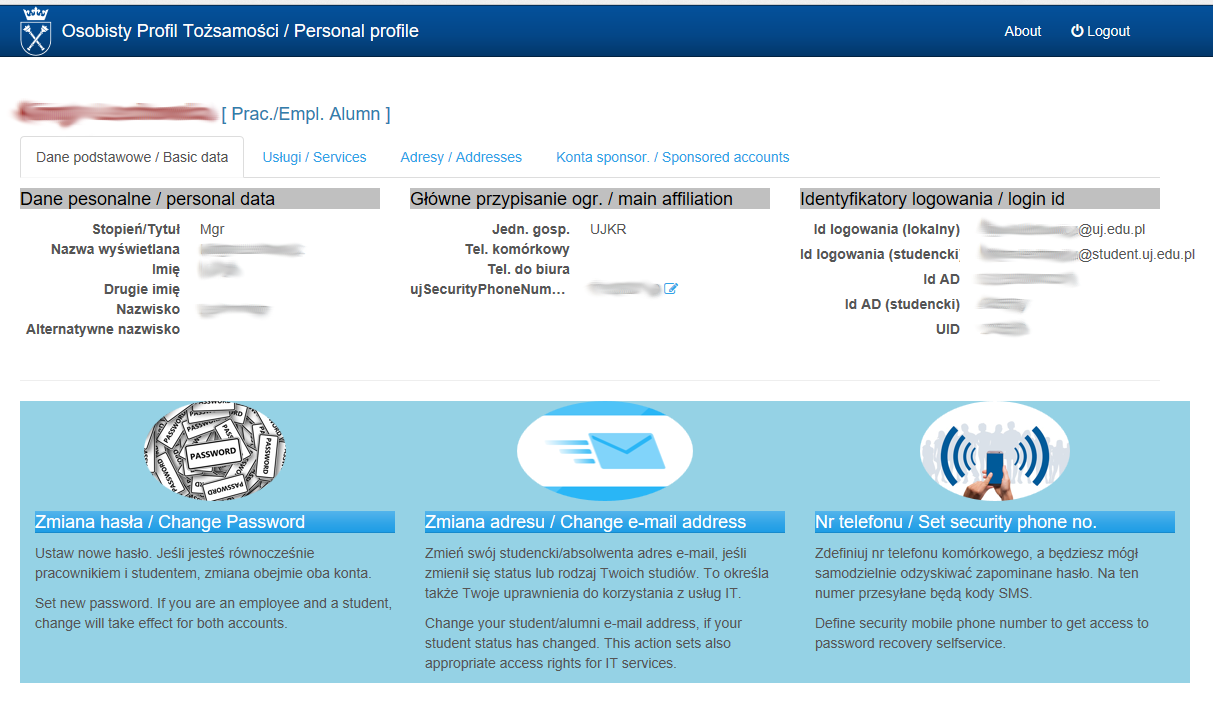 OPT can be used by people who have migrated to new e-mail.

Using the OPT functionality, the user may:

The Personal Identity Profile application is available at   https://idm.uj.edu.pl/OPT .

The application is adapted to mobile devices.

Authentication in IT systems of the Jagiellonian University

In general, the following rules for handling identifiers apply:

Local identity and identity in the cloud - special cases

Due to the fact that users, apart from local systems (on-premise), can use cloud services, there must be an instance of their identity in the cloud as well.

This is achieved by synchronizing the identity on-premise AD with the user directory (Azure) in the cloud. Synchronization is maintained by the identity management system.

The identity management system is responsible   also for synchronizing passwords between these identity instances.